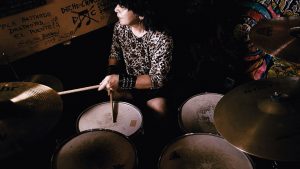 Just like we mentioned in the movie we posted the other day, as of July 2020, Imari Tones are not playing live shows right now.

There are 2 reasons for this.

One is due to the coronavirus.
The other reasons is our drummer Koji Maya has a problem with his shoulder.

Koji has had a car accident in the past. Because of that, he had a slight issue with his left shoulder. However, as we continued intense rehearsals and played live shows, the condition of his left shoulder got worse.

It was in January 2020 that his doctor ordered him not to play drums. Because of this, we decided to take a rest for a few months, including rehearsals.

During that period, coronavirus pandemic has happened. Due to the social situation, Koji’s left shoulder treatment was massively delayed.

Also we decided we should be cautious for the virus, considering Koji’s smoking history.

While everything was on halt, in May, Koji told us that he wanted to take some time off of the band activities, because it’s expected that it would take much more time for his shoulder to heal.

We (Tone&Marie) accepted this, and in spite of being unable to play live, we decided that it’s a good opportunity for us to focus on the internet activities.

Koji is wanting to come back once his shoulder condition get better. Tone and Marie are wanting to play live shows again once the world is safe, hopefully on bigger stages, with bigger audience.

Currently Imari Tones are planning a “Best Of” album and also preparing for the release of “Nabeshima”, the Ultimate Japanese Christian metal album. Tone is writing a new song every month for Patreon. Having its focus on songwriting and recording, Imari Tones’ creative force is more powerful than ever.

For now, we are not playing as a band.
But we will focus on the internet activities and releasing songs. We know it’s time for us to grow. We will reach more people with our music, both in Japan and in the world.

We believe we can see you at our live shows in a (not so far) future.

So please support us.
From now on, we need your help to grow.
We believe we can go further.