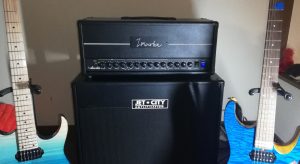 I’ve got a dream. This year we gonna make “Nabeshima” album, which will be our Ultimate Christian Metal music. But I want to go even further. I’ve got more ideas for great Christian metal albums based on Japanese history and also Christian history in the world. Our music is getting deeper and better. I want to pursue those ideas.

We’ve been thinking about starting Patreon (or something similar) for a while now.
We are getting serious about making money with our music. Not big money but some small money to make it sustainable. Because we have to be sustainable in order to keep making music. I want to complete this mission as one and only Japanese Christian metal artist.

Now this is the guitar amplifier with which I’m gonna make “Nabeshima” album. I named her “Imaria”. (The cabinet, of course, is just for home use. I’m gonna use proper Marshall 12×4 for recording at the studios.)
It may be funny but it’s been a while since I had owned my own amp (It’s not unusual for Japanese guitar players).

Because I always used some amplifiers that were available at the studios. I used Marshall JVH210H for our last 3 albums. But for “Nabeshima” I need something with more character.

If you Google it, actually this “Imaria” is a budget amp. That is the reality. We always have made our albums with budget gears and inexpensive instruments with unorthodox methods.

We don’t need big money. We don’t necessarily want to be famous. But we have to make it profitable and sustainable. We need your support. Probably after we announce our “New Lineup” officially, we will start this “Patreon” thing. (or something similar)

We will try our best so that we can fulfill this Musical Mission From God.

Thank you very much and God bless you!
Tak / Imari Tones (Japan)