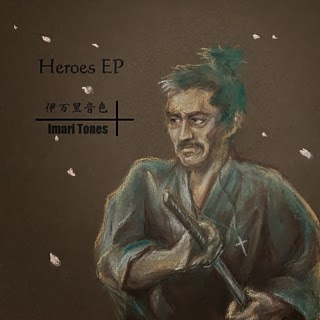 I know we are very slow to put this news on our blog,
but we released our new EP “Heroes EP” in November.
It’s an EP and not a full album, but it took us a very long time to make it.
We started rehearsals for the songs on this EP in January 2012.
We started recording in June 2012.
We recorded 4 songs in Summer 2012, but we wanted to add some more songs to it.
We did the USA tour (The Extreme Tour 2012) and after that, we recorded 2 more songs. 1 song is a song for our friends at Famicom Dojo (retro game website/podcast). Another song is a Japanese version of our worship song called “Give Us Your Miracles”, now called “Kiseki Wo Kudasai”.
But it didn’t end there. When we played a church concert at Misono Baptist Church in February 2013, they gave us a nice live recording.
So we decided to include 1 live track from this church concert, which is “Precious”, a very special song of ours.
It took us even more time to prepare for the release. Preparing artwork and making the release plan.
We had another tour, this time in Japan in October 2013. We had been too busy and the release date was shifted even later.
And finally we could release the EP in November 2013.
Mayumi, a good friend of ours provided a great artwork of “Christian Samurai” in old Kurosawa movie style.
With this great artwork, “Heroes EP” is our personal favorite, with our Love and message. Our love for Japan and its history.
Leading track “Overcome” is already getting a positive reaction both online and at live shows. And “Heroes” is probably the song with our strongest message and statement so far, about the history of Japan and the world.
Please check it out on iTunes and/or BandCamp.
iTunes
https://itunes.apple.com/us/album/heroes/id745041574
BandCamp
http://imaritones.bandcamp.com/
(This is digital download issue. We probably are making physical CDs when we go to next tour, but not sure when it will be.)
Also we appreciate if you help us spread the word and be featured on blog/magazine.
Thank you very much!
I think that’s all for today.
May God bless you richly in new year 2014!
Merry Christmas!
Tak “Tone” Nakamine / Imari Tones