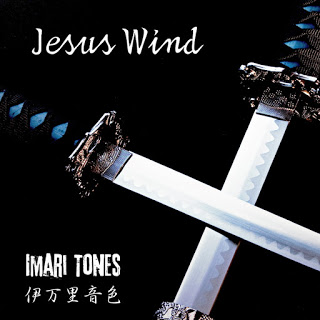 Our new album “Jesus Wind” is released!!
The concept album about Japanese Christian history, now available on major online music stores such as iTunes, Spotify and Amazon.
Thanks to your support, our IndieGoGo campaign was successfully funded and we made the CDs. They are available on BandCamp!!
https://imaritones.bandcamp.com/album/jesus-wind
Here is our press release on Jesus Wind album!!!
Thank you very much!!!
– – – – – – – – – – – – – – – – – – –
For Immediate Release
Contact: Tak Nakamine
Email: [email protected]
Date: November 16, 2017
Title: Japanese Christian Metal Band IMARI TONES releases new album “Jesus Wind”, a concept album about Japanese history
Yokohama, Japan – November 16, 2017 – Japanese Christian heavy metal band Imari Tones releases new album titled “Jesus Wind” to discover the unknown spiritual history of Japan
Japanese Christian rock band (virtually the only active Christian metal band in the Buddhist nation) Imari Tones has released their new album titled “Jesus Wind” on November 9th 2017. According to the band, “Jesus Wind” is a concept album about Japanese history from a Christian point of view. Imari Tones was formed as a band in 2004 and became a Christian rock band with current lineup (Tak, Hassy, Jake) in 2008. The band has toured both in Japan and USA, while recording many albums independently.
After releasing the former studio album “Revive the World” in 2015, Tak (guitars/vocals) was interested in Japanese history and came up with an idea for the album. He says, “We wondered if it’s possible to make a concept album. A concept album to focus on Japanese history from a Christian point of view. So many Japanese people think Christianity is Western/European religion. But we don’t necessarily think that way. In fact, essence of Christianity was carried to Japan in many ways. For example, if you read the book “Bushido” by Inazo Nitobe, you can see Bushido (Samurai’s code) has so much in common with Christianity. Also it is widely known that Japanese Buddhism in medieval age was influenced by Christianity. “ After intense rehearsals and 5 months of recording work, Jesus Wind was finally finished.
The album consists of 3 parts: Past, Present and Future. This is because the band decided to write not only about the past, but also about the future, in order to convey the message of hope. The Present part gives the listener a feeling of tension and reality, through the songs about the ongoing events like Fukushima Nuclear Power Plant incident in 2011 and political turmoil in the current world. The future part has almost prophecy-like overtone, with spiritual utopian songs like “Revolution” and “New Jerusalem”.
Although playing in “Christian Metal” genre, Imari Tones is also known for its diverse music styles, often progressive with a similarity to Rush and Yes. But they focused more on straightforward heavy metal style on this album. As a result “Jesus Wind” is the heaviest and most intense heavy metal album Imari Tones has made so far. “Repent”, the lead single and the first music video from the album, is nothing short of a loud & clear statement as a Christian metal band from the East. It is not a coincidence that Tak quotes the Bible verse from Isaiah 42 in the song “Revolution”; Sing to the Lord a new song, and His praise from the ends of the earth, You who go down to the sea, and all that is in it, You coastlands and you inhabitants of them!
The album is available on iTunes and BandCamp, as well as on digital streaming outlets such as Spotify, Google Play, and Apple Music. Physical CDs are available on BandCamp, where you can buy directly from the band.
Track List:
“Past”
1. Jee-You
2. Dying Prophet
3. God’s People
4. Saints Seeking Salvation
5. Bushido
“Present”
6. The War
7. The Peace
8. Remembrance
9. The Wave
10. When The Nation Falls
“Future”
11. This is How Freedom Dies
12. Repent
13. Don’t Stop Walking
14. Revolution
15. New Jerusalem
Imari Tones website:
https://www.imaritones.net/
Imari Tones Facebook:
https://www.facebook.com/imaritones
Imari Tones Twitter:
http://twitter.com/imaritones
Imari Tones YouTube channel:
http://www.youtube.com/imaritones