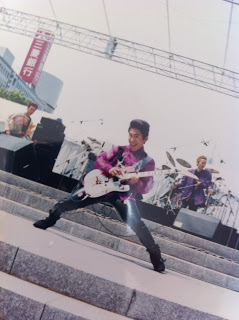 [This special photo from 1990’s]
A lot of things are happening in the world.
Hurricane in USA, missiles in North Korea.
We pray for recovery and safety for those who affected.
I see some of my favorite Christian bands (such as Switchfoot) are doing benefit concerts. For an indie band from Japan, it’s a bit awkward to post about our new album and crowdfunding project.
But just “one more push” and it will cover the cost of manufacturing CDs.
So if you’re interested in our new album, please check and help (^^)
“Jesus Wind project on IndieGoGo”
https://igg.me/at/jesuswind
Meanwhile I’m thinking about how to make it special.
I think we are going to add “something extra” for people who helped us on IndieGoGo. Other than just a CD and album download, we are wanting to add something extra. Because it’s a special occasion, right?
What do you think?
What should we do to make you happy?
Personalized video/audio message?
Or some “unreleased” songs?
Yes it’s true we have some “unreleased” songs dropped from the official albums in the past. But it’s also true they were dropped because something was not good enough.
So I remembered this old photo.
Some of you might have seen it before on my personal facebook account.
It’s a photo from 1990’s. Mid 90’s, I should say.
I was a teenager. 15 years old, I think. (The photo was taken in Nagoya city, Aichi prefecture, Japan.)
I was playing guitar in this local band and we ROCKED the local scene.
I wrote some of my first songs in this band.
Among all those songs, we recorded just 1 song in a recording studio.
Do you think you wanna hear it?
It’s a Japanese teenage local band in Mid-1990’s. So you don’t expect some “dubstep” or “postrock”. You will probably expect something like Van Halen and Bon Jovi.
But probably you will be surprised at the fact I was already writing some good music (hopefully).
Funny thing was, I later quit the teenage band because my priority was to study and to enter college, but some of the guys in the band kept playing and went successful in 2000’s Japanese music scene. Especially the singer guy became a very successful songwriter and his songs were all over Japanese TV in the last decade. It’s funny because I was the main songwriter back then in the teenage band. Probably he learned songwriting skills from me 😉
I hope this “teenage” song will interest you.
But if you have any good idea, please let me know.
Thank you and God bless you.
May God protect all the people from disaster.
May God bring peace to the whole world.
Tak / Imari Tones (Japan)